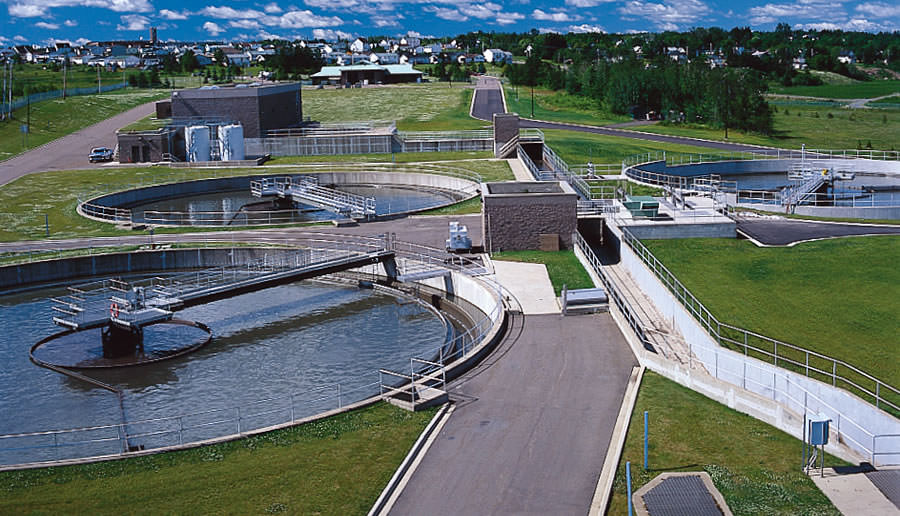 The Main Pumping Station located on the plant site at Outhouse Point (property having been granted initially to a Mr. Robert Outhouse) is the heart of the collector sewer system, a point of collection for all lines and continuous pumping to the Wastewater Treatment Facility (WWTF).The cylindrical structure extends 30 m below grade and 9 m above ground, much like a 10-storey building underground.

The actual WWTF was commissioned in 1994 with a capacity of 115,000 m3 per day, or 25 million gallons per day. The plant was laid out to facilitate expansion to biological treatment in the future.

The five-year historical operational data can be seen in the below table:

Approximately 11,635 million litres of septage and grey water collected from rural communities surrounding Greater Moncton (50-km radius) were also treated at the WWTF. Inorganic solids such as sand and gravel particles and screenings are removed in preliminary treatment through the screening and grit removal process and transported to the Southeast Regional Service Commission's (ECO 360) waste management facility for disposal.

Chemically assisted primary treatment uses chemical coagulants to increase capture of settleable solids. Sludge is dewatered by centrifuge to increase dryness. Lime is then added to produce lime-stabilized biosolids. In 2019, 11,311 tonnes of biosolids were shipped from the WWTF to the Composting Facility.

The GMWC operates a chemically assisted primary treatment plant located at 355 Hillsborough Rd in Riverview. Wastewater from Moncton, Dieppe and Riverview arrive at the wet well reservoirs of the pumping station from where it is pumped to initiate preliminary treatment (screening and grit removal) followed by primary treatment (settling).

The GMWC Pumping Station facility serves to lift wastewater from the underground tunnels and sewers to the preliminary treatment building. This station is cylindrical in shape and is divided into two halves a dry well and a wet well. In the dry well, motors, pumps, electrical control, etc. are located. The wet well is further divided into two halves of 1,800m3 volume and 27 m depth, these two wet wells are interconnected through gates. Pumping is carried out by 4 centrifugal pumps with a capacity of 1,020 L/s.

The wastewater pumped from the Pumping Station enters the inlet chamber located ahead of the bar screen channels to initiate preliminary treatment. From this point wastewater flows by gravity to downstream unit processes. GMWC Preliminary Treatment consist of the following physical processes:

At the chambers air is injected perpendicular to the wastewater flow creating a spiral roll velocity pattern, allowing grit to be washed off from the stream. Settled grit is removed from the chambers and pumped to the degritting cyclones. Centrifugal forces further separate grit from the liquid at the cyclones, liquid stream is returned back to the process. The grit stream leaving cyclones is sent to a grit classifier for further rinsing and draining of the material prior to disposal.

GMWC Primary treatment removes suspended organic solids, Biochemical Oxygen Demand (BOD), floatable debris and grease through physical and chemicals processes. There are 4 new Primary Clarifiers that were commissioned in 2019. Once the full biological process is commissioned, the new Primary Clarifiers will continue to provide solids settling ahead of the Bioreactor and be able to provide chemically enhanced primary treatment during periods of extreme high flows. The combined volume of the four Primary Clarifiers is 13 million litres or equivalent to five Olympic size swimming pools. They are capable of processing flows ranging from 90 to 143 million litres per day and even higher with the use of chemical coagulants.

A chemical product called a chemical coagulant is added to the wastewater upstream clarifiers to enhance solids removal. The chemical coagulant destabilizes the negatively charged particles to reduce the forces that keep the particles apart. This allows their agglomeration to form settleable flocs.

The chemical product used to aid the flocculation process (the formation of flocs) is called a flocculant. A synthetic organic anionic polymer is used in addition to chemical coagulants, to bring smaller particles together thereby increasing their size and further enhancing clarification.

Wastewater flow is split into three sedimentation circular tanks (primary tanks). The wastewater is carried to the center column of each tank through underground piping. Outlet ports located in the top section of each column are used to diffuse the flow entering the Clarifier.

Rotating rake arms equipped with deflector blades are continuously scraping the settled sludge across the bottom of the tank to a central sludge thickening well and sludge hopper.

Clarified wastewater (effluent) is then discharged to the Petitcodiac River. Sludge is pumped using progressing cavity pumps to the solids handling facility.

Floating scum, on the surface of the clarifiers, is directed outward to a scum baffle using skimmer arms. A scum box is used to collect the grease and floatables which then flow by gravity to a scum hopper. Scum is pumped from the hopper back to an outlet located at the base of the center column using centrifugal pumps located in the Primary Galleries.